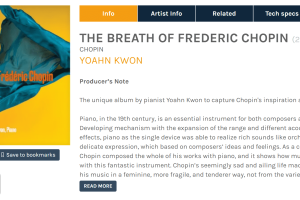 The unique album by pianist Yoahn Kwon to capture Chopin’s inspiration and sound.

Piano, in the 19th century, is an essential instrument for both composers and pianists. Developing mechanism with the expansion of the range and different acoustics with new effects, piano as the single device was able to realize rich sounds like orchestra sound and delicate expression, which based on composers’ ideas and feelings. As a composer and pianist, Chopin composed the whole of his works with piano, and it shows how much he was fell in love with this fantastic instrument. Chopin’s seemingly sad and ailing life made the performer play his music in a feminine, more fragile, and tenderer way, not from the variety of musical expressions and ideas that he sought. While his music is arising individual freedom of emotional boundary, those often distorted and exaggerated. However, Chopin’s music must be beautiful under the strict musical structures because he sought to follow the classical tradition of J. S. Bach, W. A. Mozart, and L. v. Beethoven. How ironic?

While living in the Romantic era, Chopin did not lean on literature. That means he focused on one single note which has independent resonance and reverb, and on the harmony and musical structure which each notation makes. Therefore, his music is more beautiful when it is played as is and straightforward without any additional exaggerated emotion.